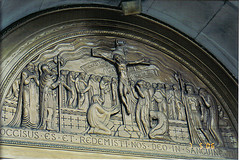 Easter is one of my favorite times of the year. It may not be as festive as Christmas, but its meaning never ceases to make me pause for a while and reassess my beliefs once again. In the UK, Easter does not mean differently from how other culture perceives it. The tradition of Easter lies basically in the same ideology – the crucifixion of Christ.

In the UK, Easter can be celebrated during different periods of the year. It ranges from the end of March to the end of April. The Friday before and the Monday after Easter are both considered bank holidays, giving an additional bonus for people who wish to have an extended break. The Friday before Easter is called Good Friday. This is the day when Christians commemorate the crucifixion of Christ. Services are held in churches all over the country and it is considered a day of mourning as well.

The day before Good Friday is called Maundy Thursday and focuses more on the Last Supper of Christ. There is a special ceremony in the UK, called the Ceremony of the Royal Maundy, wherein the Queen participates in distributing Maundy Money to senior citizens who are considered of exceptional worth to their community.

Though Easter has its roots in religious activities, there are many people today who celebrate it for less spiritual reasons. It is also considered a time to take a break from daily living and time to spend with family and friends.