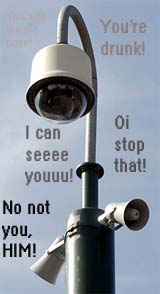 CCTV cameras have been installed in Middlesbrough that not only record and monitor you in public but can now talk at you too.

The new speaker system has been installed to allow camera operators to berate members of the public when they misbehave, using such tried and tested phrases as:

“Would the gentleman with no trousers on please leave the middle of the road.” and “Warning: You are drinking that can of stella in an alcohol-free zone.”

The camera operators are live and simply need to press a switch to announce your behaviour to the entire street. The scheme is deliberately attempting to shame people into behaving.

The mayor of the town instigated the scheme – any guesses what his previous profession was? Yup – policing.

Apparantly, Middlesbrough like the new speakers: “Put it this way, we never have requests to remove them.”

Perhaps the most amusing part of all this is the script to which the camera operators much stick. If the ‘criminal’ obeys the warning or order that is sent to them from the camera, the operator will add a pleasant “Thank you” to bring the ‘conversation’ to a close:

“We always make the requests polite, and if the offender obeys, the operator adds ‘thank you’. We think that’s a nice finishing touch.”

Those of you who are already thinking of Orwell will be pleased to know that, while infringing on our liberties, they are at least doing so with the utmost in good manners.