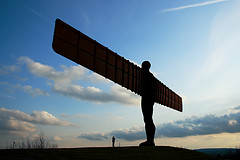 The Angel of the North is a relatively new landmark in Great Britain. Some say it is popular, some say it is controversial. If you have not heard of it, then it is about time that you did. This landmark is a modern sculpture made of steel and is located in Gateshead. As the name implies, the steel sculpture is of the figure of an angel. Wikipedia describes the Angel of the North as:

Standing 66 feet (20 metres) tall, with wings measuring 178 feet (54 metres) across — making it wider than the Statue of Liberty’s height. The wings themselves are not planar, but are angled 3.5 degrees forward, which Gormley has said aims to create “a sense of embrace”.[1] It stands on a hill, on the southern edge of Low Fell overlooking the A1 road and the A167 road into Tyneside and the East Coast Main Line rail route.

The angel is definitely something that you must see if you ever find yourself in this part of the world. As you can see from the description above, it is VERY big and can be quite overwhelming. You can just imagine the effect that the work of art can have on a person. While it was being built, there were some sectors who were saying that it would never work; that it would be a menace to motorists. Some even went as far as to call the work as an angel of death.

Well, we now know that Antony Gormley, the designer, has been right all along. The Angelf of the North is a sight to behold.