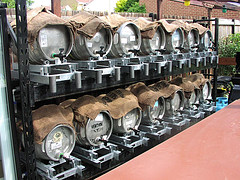 There is no doubt about it – beer is the refreshment of choice for majority of the British. Indeed, it has been referred to as the country’s national drink many times over. So what is the big deal about beer? Perhaps, in order to answer this question, it would be necessary to go back in time and see how beer came to play such an important role in the British culture.

Stason.org provides a brief but neat narrative about the origins of beer in the UK:

Something like beer has probably been drunk for many thousands of years. For centuries it has been an accepted part of northern European lifestyle. The largest brewhouses were to be found in religious institutions that catered for a complete community, but otherwise brewing was on a domestic scale. 19th century industrialisation had a profound effect on the size of breweries and started a continuous process of takeovers and mergers with breweries and brewing companies getting larger and more powerful. The wealth of the brewers lead to their establishing what today we call franchises – the tied house where the publican is a tenant of the brewery and sells only their beer.

Fortunately there are still breweries where you can see the traditional processes used for the last two hundred years.

In the 60’s the production of keg beer, increased rapidly. By filtering and sterilising before it left the brewery, then adding gas at the pub, the beer was easier to keep, always looked clear with lots of nice fizz. The economics of this operation and the marketing opportunities arising from it lead to an acceleration in the continuing process of takeovers, eliminating small brands, closing smaller breweries to build larger, more modern ones. Also at the time many brews suddenly became weaker.

I’d say that there is still a lot of pretty strong beer in the UK today. In the next posts, we’ll talk more about this beverage.