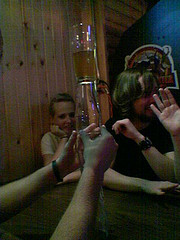 Every nation in this world would certainly want something to be called their core culture. Some countries (especially in Asia) label their cultures as hospitable and welcoming. Others label their cultures as hard working. Still others prefer the label easy going and fun loving. What is the core culture of the Britain of today? If someone were to ask you this question, what would you answer off the top of your head?

I was quite saddened when I read something about this over at Time.com. Here are some excerpts from the feature article:

What are the key components of Britishness? The bulldog spirit? A stiff upper lip? Or a penchant for Sex on the Beach? With Britain locked in an identity crisis (the English feel English, the Welsh, Welsh and some Scots are so eager to assert their Scottishness that they want to disunite the United Kingdom), these questions are troubling Prime Minister Gordon Brown.

Oddly, Brown overlooked another fundament of Britishness: alcohol-fueled misbehavior. Booze culture unites Britons from Land’s End in southwestern England to John O’Groats at the northeastern tip of Scotland, and it’s also one of the U.K.’s best-known exports. In sun spots such as Ibiza, Mallorca, the Canary Islands, Spain and Greece, English, Welsh and Scottish holidaymakers raucously intermingle, indistinguishable from each other in their bright leisure wear and brighter sunburns, downing alcoholic concoctions such as Sex on the Beach, sometimes as a prelude to the act itself.

The feature is longer than these two paragraphs and I felt disturbed after I read it. Is this how people of other nations perceive the British people? Do they really think that the British is a nation of boozers?