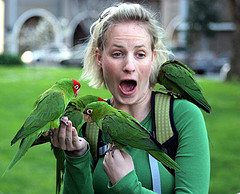 And I can’t even get a prescription! Ha ha, here is a piece of odd news that I read on the Telegraph’s site:

Increasing numbers of British pets are being given Prozac to help them battle against depression, a leading veterinary expert has revealed. Tropical birds such as parrots are the worst affected by depression, according to television vet Romain Pizzi. Mr Pizzi, who presents Creature Clinic on BBC3 and is a specialist in zoo and wildlife medicine for the Royal College of Veterinary Surgeons, said pets are affected when owners leave them alone for hours on end.

He said: “Contrary to some people’s expectations parrots are very intelligent and sensitive animals. Typically if people go out to work all day their parrot will get very bored and frustrated and eventually develop depression. Symptoms often include plucking out their feathers or self-harming, which is obviously very dangerous. When Cockatoos in particular are depressed they can start to self-mutilate and peck their own legs to the bone.”

I do not know if this is a British peculiarity as I have not really run across news items about other countries doing the same thing. If there is one thing that this says about the British, though, it would be that they do love their pets. Wouldn’t you agree? I’d say that if you didn’t have enough time to spend with a pet, though, it might be better to simply NOT get a pet in the beginning. What do you think?