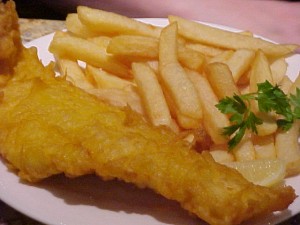 If you ever find yourself in Florida and you are craving good old British food, then the place to go would be Piper’s British Corner. Established by Peter Bonnar, who traces his roots to the UK, this British grocery, as locals call it, caters to British tastes. St. Petersburg Times reports:

On Wednesday, Bonnar re-opened his popular establishment — Piper’s British Corner at 5421 Main St. — in a cozy strip-mall storefront featuring the flags of Scotland, the United Kingdom, Ireland and Wales waving in front.

Bonnar had originally opened in 2005 in another storefront a few blocks away, but decided two months ago to move because he needed more space.

And some heartier food and drink.

Now patrons at the multipurpose cafe, tea room, and beer and wine bar can order from a full British/American menu that includes Bonner’s homemade fish and chips (from haddock and cod), shepherd’s pie, Irish stew, roast beef and Yorkshire pudding.

Does that sound good or what? You can choose to eat at the establishment and enjoy the ambiance which highlights the British culture like anything. Otherwise, if you want to purchase food stuff such as tea to bring home, you can do so as well.

Though Piper’s is best known for its British fare, you can also feast on more traditional American food. Then again, you can always find that stuff in other places. If I were you, I would stick to the British food and enjoy something quite different.