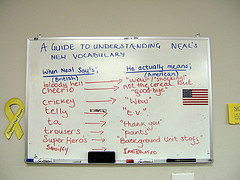 Anyone who has tried learning English and not knowing that there is a difference between the variations of English used around the world would know how confusing it could sometimes be. The mere fact that there is what we call American English and British English provides for some confusion in itself. Add to that the numerous colloquialisms that result in slang and you would be in for a fun ride!

If you grew up in the UK or at least have lived there for many years, then the chances are that you would recognise a lot of British slang. Yet what if you are new to the language (British English)? I bet that learning British slang would prove to be a totally new learning experience. I came across a site called The Very Best of British (The American’s guide to speaking British) and I really had a grand time browsing through the extensive list of slang.

All right? – This is used a lot around London and the south to mean, “Hello, how are you”? You would say it to a complete stranger or someone you knew. The normal response would be for them to say “All right”? back to you. It is said as a question. Sometimes it might get expanded to “all right mate”? Mostly used by blue collar workers but also common among younger people.

Any road – Up north (where they talk funny!!) instead of saying anyway, they say “any road”! Weird huh?

Belt up – For some reason I heard this quite a lot as a kid. It’s the British for shut up.

Those are just few of what I thought I could start using – and be laughed at for not being understood outside of Britain! 😉