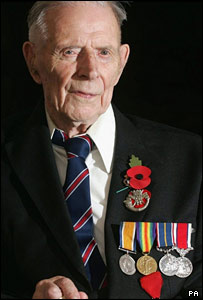 Today is a sad day for the family of Harry Patch, who was the last British survivor of the First World War. He was 111 years old. Harry Patch was known as the last Tommy. He fought in the battle of Passchendaele in 1917. If you are not familiar with this battle (I can’t blame you, I had to look it up myself, to be honest), it was one wherein more than 70,000 British troops met their end.

If you remember, I posted something about another war veteran last month, Henry Allingham. He became the oldest man at 113 years old last month when the man who held that title passed away. Allingham also served in the First World War. About a week ago, however, he also passed away, making Harry the oldest man.

In what we can probably call a series of unfortunate events, Harry Patch also passed away. He is survived by loving friends and family members. Even Gordon Brown had good words for the veteran: “I had the honour of meeting Harry, and I share his family’s grief at the passing of a great man.”

Jim Ross, a friend of Patch’s said of him: “Harry died peacefully, surrounded by his many friends. While the country may remember Harry as a soldier, we will remember him as a dear friend. He was a man of peace who used his great age and fame as the last survivor of the trenches to communicate two simple messages: remember with gratitude and respect those who served on all sides; settle disputes by discussion, not war.”

For the rest of us, this is a good reminder to remember those who have gone before us.