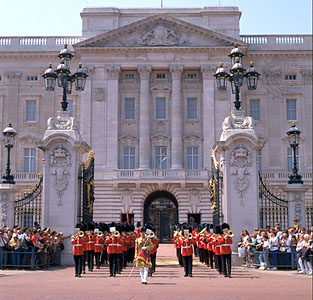 When I think of London, I cannot help but think of Buckingham Palace as well. In fact, it is a must for any visitor to the city. Buckingham Palace is the official residence of the Royal Family in London and is the venue for state occasions and other royal events. Of course, it is one of the major – if not THE major – tourist attractions in London.

Buckingham Palace was built in 1703 for the Duke of Buckingham (yes, hence the name). It was originally dubbed the Buckingham House but succeeding extensions and improvements of the building prompted its becoming the official royal residence of the British Monarch. The first royalty to occupy the palace was Queen Victoria in 1837.

Today, Buckingham Palace is normally closed to visitors, though of course, anyone can stand outside and try to catch a glimpse of the royal edifice. There is some good news for the general public, though, as from March to April of 2008, guided tours will be carried out. What is in store for those who want to take these tours? Well, an expertly guided tour of the 19 State Rooms. Visitors can feast their eyes on masterpieces created by renowned painters, antique English and French furniture, and the architecture of the palace itself. To end the tour with a bang, champagne will be served at the Grand Entrance.