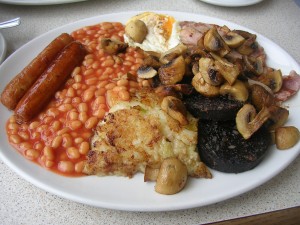 In England we tend to eat three meals a day. Many people eat their biggest meal in the evening which is often called supper or dinner. Breakfast is usually between 7am and 9am.

What do the English eat for Breakfast?

Well, this varies alot from person to person and some people skip breakfast altogether (although it is widely considered unhealthy to do so by most English people).

I expect you think you already know what an English breakfast consists of (or dare I say it, the ‘full English Breakfast’). Most people would say that the English breakfast was eggs, bacon, sausages, mushrooms, baked beans and fried bread.

According to a survey of commuting workers a more typical English breakfast nowadays is more likely to be a simple bowl of cereal, a slice of toast or bread, orange juice and a cup or two of coffee. The English definitely rely on their coffee.A more traditional English breakfast consists of eggs, sausages, bacon, fried bread and mushrooms.Hotels particularly like to serve this option at their breakfasts. We also call this style of breakfast a ‘fry-up’, because most of the food is fried in a pan.

Cereals have become the healthy choice although many of the popular cereals on the market today are quite the opposite, full of sugar and other unhealthy elements.

Regardless, there are healthy cereals packed with whole grains which provide a good source of energy and are often had with milk.

A traditional winter-time alternative to cereal is hot porridge, which is a gloopy white substance that most children positively dislike!