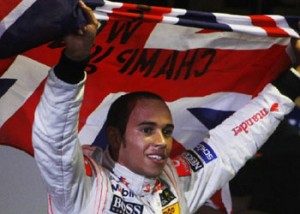 No one knew for sure who was going to win the F1 championship this year. For the longest time, it was Hamilton who was dominating most of the races but you know, in this sport, you can never be sure about the outcome. In the end, Lewis Hamilton proved to be all that his fans have been dreaming of. The global media has been having a heyday at his win as well. This young British driver has made the headlines all over the world and countless eyes are on him. It is just fitting to show an excerpt of a news report from The Times Online, one of the leading British newspapers:

Lewis Hamilton produced the most dramatic climax to any Formula One season at Interlagos yesterday and the world’s media has responded by hailing the man many believe can go on to become one of the true greats.

Hamilton and his McLaren team kept their nerve in the rain, overtaking Timo Glock’s Toyota almost within sight of the finish line to write the 23-year-old’s name into motorsport history. Hamilton has become Formula One’s youngest champion and only the second man to win the title in his second season.

In Britain Hamilton has dominated front and back pages with The Sun leading with the headline “Phew, Lew”, the Daily Mirror saying “Lew Beauty” and the Daily Mail declaring the champion as “Last-lap Lewis, the £100m British hero”.

Naturally, not everyone is happy with his achievement. Everyone is entitled to his own opinion, of course, but this is something that Britain can be very proud of.