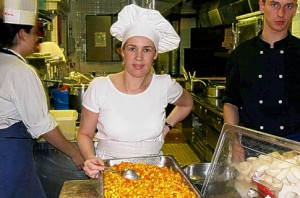 One can expect to taste all sorts of cuisines in London. Being a melting pot of all cultures from the four corners of the world, this is but understandable. I bet that you have not gone to ALL the restaurants in this city. One restaurant that I would like to try – if not only for the food but for the service – it is Hélène Darroze At The Connaught.

Obviously, I have not had the pleasure of dining here but let’s take the word of critic Matthew Norman. In his feature article at The Guardian he says:

And so it is, this cooking in which Darroze infuses imagination, flair and absolute mastery of classical French technique with those self-consciously eclectic touches (Sichuan peppercorn icecream, for instance, with a poached apricot pudding) that remain so stubbornly in vogue. And yet, and yet…

The relentlessness of the faux-generous little treats (sumptuous beyond belief as the petits fours were, note the price of the cup of coffee with which they came) combines with the hyper-attentive service to make this a slightly unnerving experience. There’s an assonance in the chasm between the elaboration of the food and the clubbiness of the decor, and the decadence feels misplaced in these challenging economic times.

His verdict seems to be ambivalent. On the one hand, the service is absolutely perfect – especially for those who like attention lavished on themselves. On the other hand, the food is “sumptuous” beyond belief. My take? I would definitely give it a try, would you?