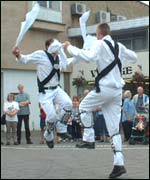 If you’re from Kent, a county in England, you may very well be spending the day recovering from the annual festivities of Hop Hoodening.

This very English festival is celebrated throughout the country because historically Kent was the main producer of Hop. Nowadays much of this grip on the market has been lost, inevitably, to imports and increasing production costs in harvesting. Nontheless, you may still find the odd example of the Hop Queen parading around in a Hop Bower.

The longest running example of the Hop Hoodening is to be spotted at the Canterbury Cathedral on the first saturday of September. As with so many English celebrations, the Morris Men have alot to do with it.

Typically the festival begins with a parade along the areas leading to the Cathedral. The Hop Queen in a Hop Bower is followed religiously by country dancing Morris Men. There are also two hooden horses, a sort of horses head atop a wooden pole with drapes hanging to conceal the bearer. Everyone meets at the nave to the Cathedral and then walk down it for the main service.

A lot of dancing goes on, as is typical for this sort of thing. Dancing at the altar, dancing by different groups and so on. Loyal supporters of the Hop Hoodening have not been free from their fair share of troubles in trying to keep the spirit of the Hop alive in Kent. In 1996 the local police came to break up festivities when the local choir had booked the Cathedral for a service, for example! This led to the fun being had in a local Methodist church; the minister there apparently doing his very best to avoid directly mentioning either hops OR beer!