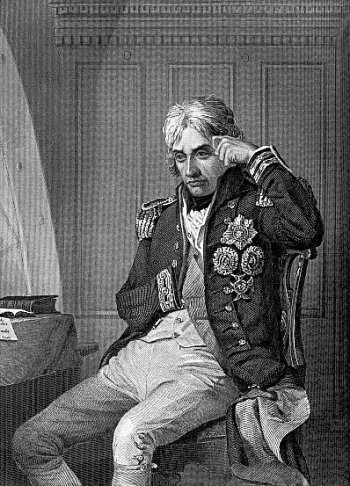 ‘England expects that every man will do his duty.’

These famous words were used by Admiral Nelson to inspire his battle squadron at the Battle of Trafalgar in 1805. The battle was to be his last.

His death was a great loss to England. His leadership was renown for his compassion towards his men, and he was famous for the respect he gave those under him.

On the flip side, the Admiral was also known to be a glory-seeker,

sometimes being too keen to find personal honour.He was part of a large family, and joined the Royal Navy very young (at 13).By 20 years old he was already a Captain, serving all over the world. He married in 1787 and returned to England on half pay from the Navy to be with his new bride.

As a commander he was known for bold action and sometimes disregarding orders.

His occasional defiance garnered him several victories against the Spanish and also at the Battle of Copenhagen where he memorably ignored orders to cease battle by placing his telescope to his one blind eye and pretending he couldnt see the signal from the other ships.

Under his leaderhsip, the Navy proved time and again its supremacy over the French.