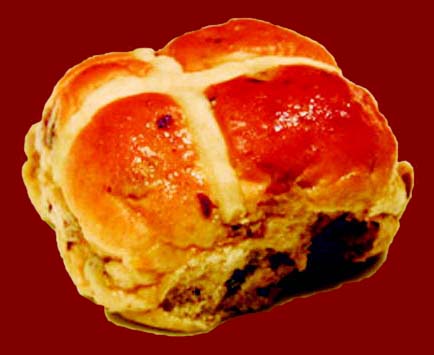 Shame on me – I never really associated this delectable baked goodie with Easter until I read Julie’s post about it in her blog, A Mingling of Tastes. She shares:

Even though I was Catholic growing up, I probably never would have eaten a hot cross bun if it weren’t for that cute little song , which I probably learned in pre-school or someplace like that. With such a catchy tune running through my head, I naturally wanted to eat a hot cross bun. Luckily, a bakery near our house made them during lent, and I remember liking the sweet little yeast rolls studded with bits of fruit and spices.

What we know as a hot cross bun became popular in Tudor England in the 1500s, but the pagan inhabitants of the British Isles probably made similar bread marked with a cross to honor Eostre, their goddess of light for whom Easter was named, according to the Oxford Companion to Food. This tradition of offering bread to the gods goes back to the Greeks and Romans and even further to the Egyptians who took a great leap toward modern civilization when they traded blood sacrifices for far less messy offerings of bread.

Today, hot cross buns aren’t really an offering, but a traditional holiday food eaten on Good Friday (also known as “the day of the cross”) and throughout Lent to remind us of Jesus’ cross.

Like her, I probably first heard of the buns from that nursery rhyme that every little kid knows. What I didn’t know was their pagan origins. Oh well, the buns are good. Why not try serving them come Good Friday? Julie shares a recipe in her blog as well.