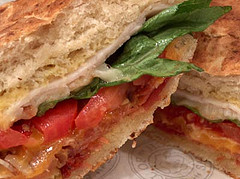 Royalty is something that not everyone has had personal experience with. For most of us, our brushes with royalty are limited to movies and books. Yet, perhaps, our lives have been shaped by royalty without our being consciously aware of it.

I came across this very witty article on British Royalty and pop culture and I could not resist sharing it with you. For example, did you know how the sandwich came to be?

One of the king’s minions was a fellow known as the Earl of Sandwich, who as we all know developed the concept of putting a slab of meat between two slices of bread. Of course it became known evermore as a sandwich. Except for little cucumber thingies served on bread with the crust sliced off, the sandwich was created to provide nourishment for the working class. A peasant could hold a sandwich in one hand and still do work with the other making him or her much more efficient.

How about the lawn?

One of the other lesser royals, a fellow named the Earl of Lawn saw how efficient the Earl of Sandwich’s peasant were and decided he should develop efficiencies in his peasant ranks, while at the same time earning a bit of silver. First he had a bunch of sheep and as we all know what goes in one side of a sheep comes out the other, and Lawn decided to call his by-product fertilizer.

He didn’t really know what to do with it until he spread some on the grass beside his castle’s moat. The grass grew and his peasants were told to cut it. Other royals saw what they perceived as beauty in the Lawn’s grass and wanted some fertilizer, too. Soon everyone began calling the mowed grass lawns after the Earl of Lawn. They sat on “lawn chairs” and drank their mead as they watched peasants clipping the grass short.

I don’t know how accurate the anecdotes are but they do make for an interesting read, don’t they?