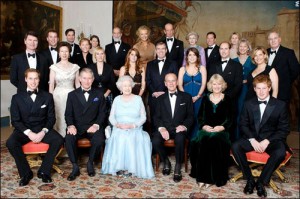 Every year, the British Royal Family spends Christmas Day walking – no, strolling – to church and back. This year, it was no different. The whole family went to St. Mary Magdalene, which is located in their estate in Norfolk. Naturally, a crowd gathered to see the nobles with their own eyes.

Tradition dictates that the entire family gather at this time of the year in Sandringham, Queen Elizabeth II’s private estate. As they walked to church, around a thousand onlookers extended their Christmas greetings to the Royal Family – either expressly or silently. Some, like Debbie Barlett, got an extra treat. Barlett is a 51-year-old carer who lives near the estate. She got a hug and a kiss from Prince William, who is third in line to the throne.

After church, the family had lunch, which is traditionally served at 1:00 pm. The traditional meal usually features a turkey (the huge kind, of course), which is raised in the estate. After lunch, everyone sits back and relaxes to watch Queen Elizabeth’s Christmas Day broadcast, which is aired at 3:00pm.

Sounds idyllic, doesn’t it? I wonder if they have any secret parties that common folk like us do not hear about?