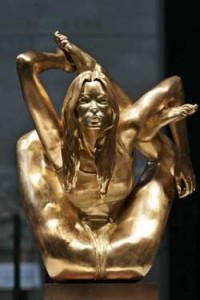 I am not sure if today’s kids know that much about Kate Moss. I do remember clearly, however, her being in the news all the time many years ago. What with her waiflike looks and her highly publicised personal struggles, her career was on a constant roller coaster ride.

Today, she has been once again brought to the limelight. This time, however, it is not her in person but a golden version – literally. LA Times Blogs has this feature on the “new Kate Moss:”

Sculptor Marc Quinn has unveiled a 50-kilogram (110-pound) gold statue of supermodel Kate Moss at the British Museum in London as part of its “Statuephilia” exhibition. The 18-carat sculpture, titled “Siren,” is worth an estimated 1.5 million British pounds, or $2.6 million. The artwork portrays the runway goddess in a bizarre yoga-like pose, her torso sticking through her lotus-shaped legs.

I have not had the chance to gaze upon the statue in person but pictures abound on the Internet and I have to say, the piece does catch one’s eye. I do not claim to be an art expert – far from it – but despite (or maybe because of it) the bizarre appearance of the figure, I cannot help but look at the statue again and again. I do not understand it, I cannot explain it, but I think I like the statue. That is not to say that I admire the model for the statue, though.

Your thoughts on this?