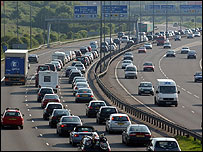 Every year, many families in Britain make it a point to go out of town for the holidays – much like people in other countries, as a matter of fact. For this year, today marks the beginning of a mass exodus out of the major cities into the countryside, spilling over to the bordering countries.

Despite the price of petrol, which has skyrocketed to astronomical amounts in the past year, it seems that a large number of motorists are still going to be on the road. According to a survey conducted by RAC, the estimated number of cars that will be on the road during this season total to about 18 million!

On the other hand, the survey also found out that majority of the motorists is planning to cut their road trips over the next several days. This is mainly due to the high prices of petrol.

Another factor that might make road trips a bit complicated today and in the next several days is the fact that the rail network is due for repairs. This of course means that more people will be forced to travel by car and traverse the roads.

So where are the Britons going during the Christmas season? Though a large number still stick to the traditional celebrations – that is, visiting family members and friends – a considerable number are also opting to go down south where the sun is shining and the breeze is blowing. Who can blame them? Rather than stressing over visits to in-laws, who wouldn’t choose a tropical Christmas instead?