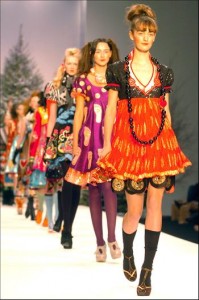 Although England may not be considered by some people as the fashion capital of the world, it does have a say in the world of fashion. In fact, one of the most happening events was held the other day in Downing Street. In what was touted to be “one of the most stylish events since Tony Blair’s Cool Britannia in 1997,” the London Fashion Week Reception hosted designers and models paraded their wares. The Telegraph has this report:

Harold Tillman, chairman of the British Fashion Council, which organizes LFW, outlined plans for the celebration of London Fashion Week’s 25th anniversary throughout 2009 and announced the launch of the UK’s largest-ever fashion fund to support emerging talent. His speech underscored the twice-yearly LFW’s importance in supporting both the £4 billion textile and clothing industry and the £40 billion retail industry.

Indeed, this event highlighted the talents of British designers and models. The next time that you hear something downgrading the British fashion world, tell them to think again.