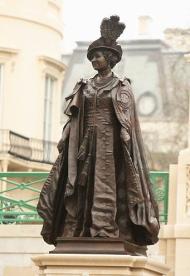 The beloved queen mother finally has her own statue standing right at the foot of her husband’s, King George VI, statue. The statues, facing Buckingham Palace, was created by sculptor Philip Jackson. It shows the queen mother, at the same age of King George VI statue (51 years old), smiling while wearing her velevet robes. The robes signify her place in the Order of the Garter, Britain’s oldest and highest chivalric order. The statue is also surrounded by carvings of important moments from her life that was done by done by artist Paul Day.

The unveiling of the statue was done by Queen Elizabeth II. Attending the ceremony were Prince Charles and his sons Princes William and Harry as well as senior members of the royal family, Prime Minister Gordon Brown and members of the queen mother’s staff.

The bronze statue stands 9 feet 6 inches tall. It costs 2 million pounds. The cost is was shouldered by the profits raked in by the sale of the special five pound coins that were produced by the Royal Mint in celebration of Queen Elizabeth’s 80th birthday.