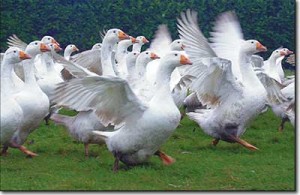 Festivals and feast days are always important. More than having lots of food and getting together with family and friends, feast days usually have a deeper meaning, a reason for being special. Michaelmas Day is one feast day that takes root in religious tradition.

Currently celebrated on the 29th of September, Michaelmas Day is also known as the day of St. Michael and All Angels. It is actually also observed by the Roman Catholic Church. In Britain, it is observed by the Church of England. The Book of Days provides more in depth information regarding this day:

In England, it is one of the four quarterly terms, or quarter-days, on which rents are paid, and in that and other divisions of the United Kingdom, as well as perhaps in other countries, it is the day on which burgal magistracies and councils are re-elected. The only other remarkable thing connected with the day is a widely prevalent custom of marking it with a goose at dinner.

In the old times, however, Michaelmas Day was celebrated on another date. This is what is recorded in Wikipedia:

Old Michaelmas Day falls on October 11 (October 10 according to some sources). According to an old legend, blackberries should not be picked after this date. This is because, so folklore goes, Satan was banished from Heaven on this day, fell into a blackberry bush and cursed the brambles as he fell into them. According to Morrell (1977), this old legend is well-known in all parts of the United Kingdom, even been known as far north as the Orkney Islands.

Today, it is still widely celebrated and the goose is still the centerpiece of the feast.