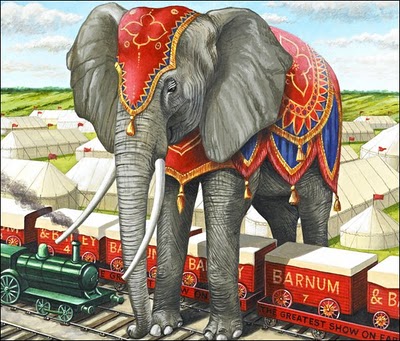 Young people today probably do not know who P.T. Barnum is, but those from an older generation will still remember how he thrilled America AND England with his freak shows. P.T. Barnum made a name for himself in both countries by showcasing the most freakish things you’ve ever seen – during those times, at least. The funny thing is that many – if not most – of his “features” were merely tricks!

No one can deny his genius, though. And, to celebrate his life and work, an exhibit is being held at the Western Bank Library Exhibition Gallery until the 27th of May. More information from the Seattle PI blog:

The exhibit, Humbug! Celebrating 200 Years of P.T Barnum, showcases original posters, handbills, and memorabilia used by the famed entertainer to promote his shows over 100 years ago. It celebrates the trickster who took America and England by storm with his collection of real and invented freakish attractions. The curator of the exhibit, Professor Vanessa Toulmin, Director of the NFA, is pleased to have the chance to show off many one-of-a-kind items from her collection: “The archive material on display is usually all in boxes behind the scenes, so it’s a fantastic opportunity to see around 100 items from the depths of our archive.” When asked to explain the magic of Barnum she replies: “He’s probably the world’s greatest showman. He created what we know today as PR/marketing and showmanship. Everything I’ve ever thought of, he did it!”

Indeed, P.T. Barnum’s skill and talent as a showman has probably not been surpassed by anyone in this century. Taking the era and the extent of his achievements into consideration, this is no mean feat! So if you find yourself in the area between now and May, do go and take a look at the collection; and, discover P.T. Barnum and why he captured the people of his time.