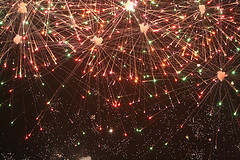 Guy who what? Strangers to British culture might very well have that reaction – I know a couple who said exactly that. Well, Guy Fawkes Night is a night of celebration traditional to the United Kingdom. It is also called Bonfire Night, Cracker Night, and Fireworks Night – more common terms used for the same event, actually.

Guy Fawkes Night is celebrated annually on the night of November 5 and is done so because of an even that occurred on the same day in 1605. On this evening, Guy Fawkes and a group of Roman Catholic conspirators carried out an attempt to bomb the House of Parliament in London. The attempt was dubbed the Gunpowder Plot and was subsequently quelled.

Though Guy Fawkes Night is primarily celebrated in the UK, previous colonies also hold their own versions of the celebration. These countries include Canada, New Zealand, British Caribbean, and Australia.

In the UK, people across the country hold celebrations both as public and private occasions. The highlight of the celebrations is to set off fireworks and build bon fires wherein “guys” are burnt. The guys are supposed to be effigies of Guy Fawkes and his group of men.

There are also certain dishes that are served on this night. These include bon fire toffee, parkin, toffee apples, baked potatoes, and black peas with vinegar.

Different areas have their own different versions of celebrating Guy Fawkes Night but the common theme is to have a night of revelry across the country.