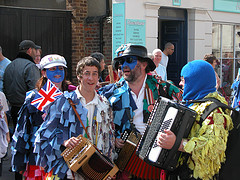 Take a step back in time and imagine children and other people having to clean chimneys – they were called sweeps back then. As you can imagine, it was a hard and dirty job. Yet those people found time to enjoy themselves as each year, they would have a festival to enjoy themselves. This tradition has roots from 300 years ago. Back then, they would celebrate on the first of May with processions on the streets. The main focus of the procession would be the Jack-in-the-Green, a seven foot mascot which represented the coming of spring. He was also called the Green Man.

Today, one of the most famous sweeps festivals is held every year in Rochester. Each year, countless dance troupes gather at the above mentioned location to hold a modern version of the sweeps festival. The modern festival has three main parts.

The initial part of the festival begins at the Bluebell Hill, where the Green Man is awakened. This happens on May 1st, at dawn. Dancing and other fun activities then ensue, with many people heading on to the pubs. The various dance groups show off their skill and other musical groups perform as well. This goes on throughout the whole weekend.

There are other two highlights of the festival, namely the Sweeps Ball held at the Corn Exchange and the Final Procession, which is held on the following Monday (considered a Bank Holiday). The focus of the parade are the sweeps – which are children dressed as chimney sweeps. If you want to have good luck, then try getting a sweep to kiss you!