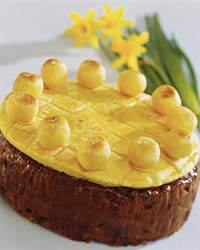 Ever heard of this? If you’re not British then the chances are that you have not. Simnel cake is traditionally considered to be especially associated with Easter in Britain. Though not everyone has a Simnel cake for Easter anymore, they can still be seen in shops during this particular season.

Simnel cake is actually a rich fruity cake which has its roots in the old days when common people worked as servants for the rich and powerful. In those days, around the 17th century, maid servants usually lived in the house of their masters and were allowed Sundays off. On the 4th Sunday of the Lent, they were allowed to make a rich fruity cake (the Simnel cake) and take it to their mothers. The highlight of this cake was 11 marzipan balls which were represented the 11 apostles of Christ – note that one is missing, representing Judas Iscariot who betrayed Jesus.

Want to know how make simnel cake? Try this recipe from Eat The Blog:

Cream the butter and sugar together. Add eggs one at a time. Sift dry ingredients. Reserve three tablespoons for later. Mix the fruits well in another bowl. Stir the flour into the eggs/butter mixture alternating with brandy. Toss the fruit with the reserved flour and stir into mixture. Spoon into pan and just to be safe, place pan on a baking sheet. Bake about 1-½ hours, though mine took nearly two hours. Cool, remove from pan and cool completely on rack.

Make recipe for buttercream. Make the twelve balls first (with a few extra for mistakes) and set in freezer to be dipped. Roll out remaining buttercream and top cake. Finish dipping buttercream balls in white chocolate and set atop cake using eleven balls to represent the true Apostles (leave Judas off) and wrap in a bow if you like (hopefully you make nicer bows than I ).