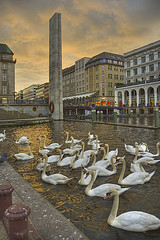 I honestly would not have known what people were talking about if I heard them say “swan upping.” Quite logically, it must have something to do with swans. But what about swans?

Well, in the UK, swan upping is somewhat of an important event. It is actually an activity that has a dual purpose – both ceremonial and practical. Every year, the mute swans in the River Thames are rounded up and then marked and then released back to the “wild.” Swan upping is normally held around the third week of July.

It used to be that the swans were caught and marked for practical purposes – to be eaten eventually. Today, however, the swans are rarely eaten, except perhaps during State Banquets.