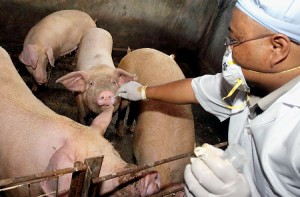 The health authorities in the country are on alert due to a case of swine flu. The infected man is an employee of the British Airways. He just came back from a flight originating from Mexico City, Mexico, when he exhibited symptoms. He was subsequently taken to Northwick Park Hospital, where he was immediately treated in an isolation unit.

According to a spokesman from the hospital, the patient “has flu-like symptoms and is responding well to treatment. The patient was admitted directly to a side room and the hospital is scrupulously following infection control procedures to ensure there is no risk to any other individual in the hospital.”

While the alert is up, there is really no need for Brits to panic at this point as the situation was contained very early on. As mentioned above, the man is in an isolation unit, barring any contamination to the outside world. More so, his case is not yet 100 per cent confirmed that it is swine flu.

However, doctors at all Heathrow terminals have been put on alert to be on the lookout for any passengers or airline crew who may exhibit flu-like symptoms. This is especially true for flights coming in from Mexico.

The World Health Organization has already issued statements that every other country in the world should take similar precautions as the flu is highly contagious and without proper safety nets in place, it could easily become a widespread pandemic. For now, if you are not travelling too much, you should be safe.