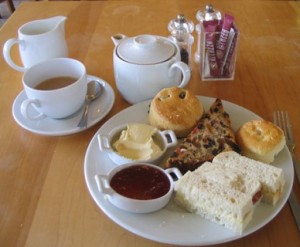 Today, the 2009 British Food Fair opened in Taipei, Taiwan. The food fair is being overseen by the British Trade and Cultural Office, in cooperation with City’Super, a well known high end supermarket in the country. The features of the food fair are, according to BTCO Director David Campbell, “sweet and savoury products specially sourced from the United Kingdom to bring local customers the taste of traditional British culinary culture.”

Naturally, the British tradition of tea and biscuits is the focal point of the food fair. In fact, Clare Lear of the British Assistance and Services Section of BTCO gave a demonstration on how to whip up a British afternoon tea using some of the products on display in the food fair. Some of these products include tea, biscuits, sauces, and chocolate.

The food fair will run until 4 September and is being hosted by three branches of the supermarket in the city. People who visit the food fair will be in for a treat – not only because of the UK food products being presented but also because they have the chance to win a round trip ticket to the UK, a Brompton Baby Pink bicycle, and a Dyson vacuum cleaner. In addition to these, entrance tickets to the Pixar 20th anniversary exhibition are also up for grabs.

While majority of the British might not have had the chance to visit Taipei, it does give you a sense of pride to know that people on the other side of the world are interested in your culture, doesn’t it?