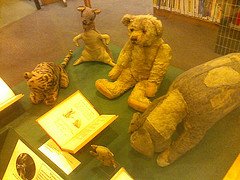 Those are some of the words of the song “Return to Pooh Corner” by Kenny Loggins. I still remember hearing this song for the first time way back and feeling wistful about my childhood – and Pooh stories, of course. From toddlers to adults, this character created by A.A. Milne is forever imprinted in many people’s hearts.

But did you know that there really is a Pooh Corner? Did you know that the forest where Christopher Robin, Pooh, Eeyore, and Piglet played in really exists? Yes, they do – in Hartfield, Sussex. If you grew up on Pooh, then a visit to where it all happened should be at the top of your list.

Hartfield can be found at the south of London, easily accessible on a day’s trip. Once you get there, you can visit the print room, where all original artwork by E.H. Shepard is available for viewing. If you want to see all of it, you would have to allot several hours.

If you prefer the great outdoors, then you should visit Poohsticks Bridge – where you can play Poohsticks – and then head on to the Pooh Corner, which used to be the candy store where Christopher Robin got his Bullseye candy.