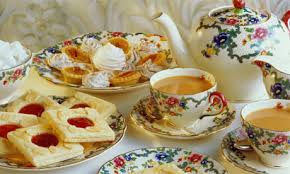 For many British households, a traditional tea time practice of eating biscuits for an afternoon tea is still common.  It is observed when friends come for a quick visit and hunger pangs are felt when dinner is still quite far off.  Tea and biscuits became an ideal solution.

Biscuits are baked flour-based products which find their equivalent in American cookies although the latter has a generally softer consistency.  Although there is much confusion with these two terms because of their adaption in different contexts, there appears to be a common consensus that biscuits refer to the hard, crisp, dry baked products.  This English delicacy has served as the perfect combination for afternoon tea.

The afternoon tea is also referred to as low tea in contrast to high tea which is actually dinner, being in the heavier side.  The time set for this is about four or five in the afternoon and never goes beyond seven in the evening.  The start of this practice has been attributed to Anna Marie Stanhope, the Duchess of Bedford who was one of Queen Victoria’s ladies in waiting.

This practice was said to have been prompted by the Duchess “sinking feeling” at about four in the afternoon which is believed to have been caused by meager noon meals.  It was also said that what started out as a simple sneaking out of bread stuffs and a pot of tea graduated into the afternoon tea which consists of invited guests enjoying small cakes and sandwiches, sweets, and tea.

There are three types of afternoon tea including cream tea, light tea, and full tea.  Present afternoon tea observation in England now follows three courses comprised of savouries, scones, and pastries, in such particular order.  Tea of course is served throughout.