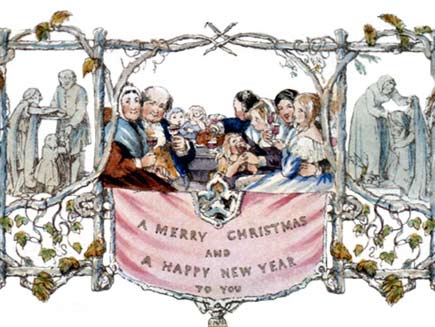 Who has not heard of the Christmas card? Just like many things associated with Christmas, most people all over the world know about it. I actually do not know anyone – from Europe, the Americas, and Asia – who has not received or given at least one Christmas card in his lifetime. Have you?

For many, though, Christmas cards are merely part of the celebrations. They do not really know the origins of this tradition. Let’s take a step back in time and see where this humble – but powerful – piece of paper came from

The year was 1843. The protagonists men named John Calcott Horsley and Henry Cole. These two men came up with the idea of what we now know as the Christmas card. Yet was this really the root of the card? Historians actually say that even as far back as the ancient Roman times, a form of the Christmas card was already in practice. It is said that the emperors in those times received tablets with engravings as gifts for the New Year. The practice was for the people to send these tablets to their leader. In a sense, those tablets were the first Christmas cards.

Obviously, as time passed by, modifications were made and the Christmas card as we know it today could be traced back to Horsley and Cole’s creation. It was in 1846 that the first commercial printing of the Christmas card was done. The design was simple – a family drinking a toast and the caption “A Merry Christmas and a Happy New Year to you.” A thousand copies were made but they didn’t really sell.

From those humble origins, Christmas cards have gone a long way. Have you gotten and sent your Christmas yet?