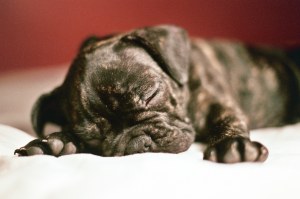 Dog lovers all over the world cannot help but adore this breed. Today, there are many other breeds of bulldogs, with the American bulldog being one of the most popular. For many, this is THE bulldog that they know. Yet, actually, this type of bulldog originates from the English bulldog, a gentle and friendly animal.

Contrary to its physical appearance, the English bulldog is in fact one of the gentlest dogs there is. In fact, English bulldogs are very good pets for families with children as they get along quite well. As puppies, English bulldogs can be bundles of energy and a handful to handle. However, as they grow older, they tend to become calmer and easier to handle.

Where does the English bulldog originate from? Despite its name, this breed actually traces its roots all the way to Asia. In the old times, nomads brought their mastiffs to Britain. These mastiffs were ferocious and were perfect for fighting and holding down prey. When bull baiting became popular in Britain, a new breed was needed – thus the birth of the bulldog. After some time, this breed was cross bred with the pug, resulting in the English bulldog as we know it today.

One issue with English bulldogs is the fact that they tend to drool a lot. That is why they need to be located in a well ventilated area and they must not be exposed to too much exercise – a perfect pet for the sedentary person!