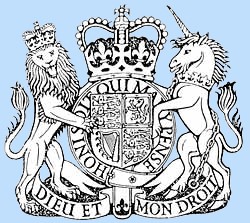 The English Lion supports the shield from the left hand side while the right is upheld by the Unicorn. In this case, the Unicorn is a symbol of Scotland.

Alas, no, the Unicorn is chained because in the days when this coat was created, a unicorn unshackled was considered unlucky, as they were mythically very dangerous beasts!

The coat of arms features the motto of England, described below.

The Motto of England

Dieu et mon Droit is written on many things such as money and indeed, the coat of arms. It is French for ‘God and My Right’. This motto was first used by Richard I, King, in 1198. Henry VI adopted it as the motto of England later.

The Coat of Arms also includes another motto:

The Motto of the Order of the Garter:

Honi soit qui mal y pense means ‘Shamed be he who thinks ill of it’.

The shield amidst the coat of arms shows the royal emblems that refer to specific parts of the United Kingdom.

The Three lions of England, the Harp of Northern Island and the Unicorn of Scotland. The shield of England with the three lions is popular now thanks to English football.

Richard the Lionheart used the symbol originally on a scarlet backgroud. It was a symbol of power and the English Throne used extensively during the crusades.