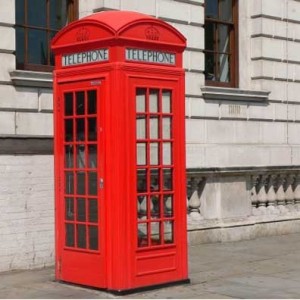 To many, the red telephone box is something rather unique on England’s streets. In a modern England where everyone is well equipped with mobile phones, there really isn’t much need to visit a little cubicle and search the pocket for 30p. However, in its heyday the fast disappearing red telephone box was a real beacon of comfort provided you didn’t have to queue for too long.

In the past, it was a true life-saver for people who had no home telephone, and it also offered not only privacy but also shelter for users. Many old English people I know often say it was a kind of public amenity in which you didn’t mind waiting for the rain to stop. Some people also claim to have had their very first kiss in one, much to the entertainment of curious passers-by of course.

There is no doubt that these red boxes are well recognised and appreciated by all countries and they reflect England’s historic development in both architectural achievements and communications. As far as many are concerned, the famous red phone box does play a vital role in English culture and heritage, and has done so for many past decades.

Fortunately enough, the charming red boxes can be found all over England. They have also appeared in countless films and while they are disappearing fast due to new communication technology, an increasing number of people are still preserving them.

As a foreigner, the red telephone box well represents England in many respects to me. I used to live in England and even though I hardly used the phone boxes at all, I spent so much time admiring and appreciating them from a creative point of view. For me, it all started with a red phone box on the beach in Brighton during my half-term visit. The brilliant contrast of the shiny red colour against the beautiful seaside of the Southern English town made a fantastic photo opportunity.

Now back home in Bangkok I’ve still got loads and loads of red telephone box photos on my computer, in the beautiful snow, among green trees, taken from many different angles, mostly with mates crammed inside. To be fair, it’s such a good reminder of my time spent in England as I still remember precisely where and with whom I was, when each picture was taken.

The red phone box is definitely not only a gorgeous piece of English street furniture, globally recognised, it was and till these days still is a priceless life-saver for many people. I reckon that British Telecom should be praised for maintaining all these gorgeous red boxes. I’m certain everyone still remembers the tragedy of the London bombings back in 2005 when all the mobile phones technically went down but good old red phone box worked perfectly fine and helped put many people’s minds at rest.