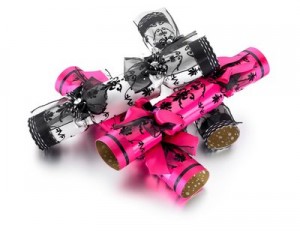 If you’ve ever celebrated Christmas in Britain, or with a British family, then you probably have had some experience with Christmas crackers. These are traditionally part of the Christmas dinner. These days, Christmas crackers comes in various designs but in the simplest form, a cracker is made of a cardboard tube with festive wrapping twisted in such a way that there are two ends. Two people have to pull at each end, and then it pops (cracks) to reveal the surprise inside. The pop is due to some chemically treated strip of paper inside the tube; the surprise usually a party hat or some other treat. The aim is to get the longer end of the cracker in order to “win” the treat.

Obviously, people would be wanting to get the longer end of the Christmas cracker all the time. This has led British researchers to come up with a formula that will ensure success at the table. AFP reports:

Diners are guaranteed success if they follow the formula O=11xC/L+5xQ which is based on the angle, grip and quality of the cracker. You must first multiply the circumference of the cracker in inches (C) by 11 before dividing that number by the length (L) of the barrel.

Take that total and add it to the figure you get when you multiply the quality (Q) — either 1, 2 or 3 depending on whether the cracker is cheap, standard or premium — by five, the Daily Mail said. The formula ought to produce a figure between 20 and 55 degrees, which is the optimum pulling angle (O). The cracker should also be pulled one inch from the end of the tail, newspapers said.

Too much trouble, don’t you think? Then again, if you want bragging rights, it wouldn’t hurt to practice and get it perfect for next year!