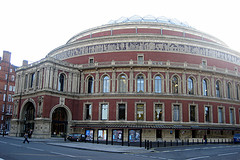 No, I am not talking about the parties that high school students look forward to each year in the United States and other parts of the world. This “prom” is a bit more, let’s say, cultured. I am talking about The BBC Proms or The Henry Wood Promenade Concerts. Does that suit your taste better?

The Proms is an age old tradition in the UK. It started way back in 1895 and lasts for 8 weeks during the summer period. Today, one can look forward to over 70 concerts throughout the whole season. The concerts are held at the Royal Albert Hall in South Kensington, London – well, at least most of them.

This year, The Proms started on July 15. As it is every year, the world’s greatest musical performances will be attended by countless people.

A little more information on The Proms from Wikipedia:

Proms is short for promenade concerts, a term which arose from the original practice of audience members promenading, or strolling, in some areas of the concert hall during the concert. Promming now refers to the use of the standing areas inside the hall (the arena and gallery) for which ticket prices are much lower than for the reserved seating. Single concert promming tickets can be purchased, with few exceptions, only on the day of the concert, which can give rise to long queues for well-known artists or works. Prommers can purchase full or half season tickets instead for guaranteed entry, although not guaranteed standing position. A number of Prommers are particularly keen in their attendance, and see it as a badge of honour to achieve the grand slam of attending every concert of the season.