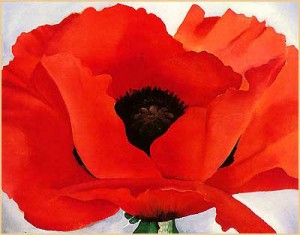 Today marks a special day in history. For many of the younger generation, it may not mean much more than a vague idea. Still, for many, November 11 is something that we cannot afford to forget for it marks the day that the First World War ended.

The red poppy has long been the symbol for death, life, and renewal. Three distinctly different things but all interrelated. This symbolism is attributed to Lt. Col. John McCrae who “was able to distill in a single vision the vitality of the red poppy symbol, his respect for the sacrifice made by his patients and dead comrades, and his intense feeling of obligation to them. McCrae would capture all of this in the most famous single poem of the First World War, In Flanders Fields.”

Today, the poppy remains the strongest symbolism of that war long ago. As the years pass, the memories and the implications may fade slowly for many people. Yet there are those who strive to keep the memory alive, if only to remind this generation and the coming generations of the stark horror that occurred. In this way, we hope that such a thing will never happen again.

I particularly like Jonathan Jones’s column for today. In it, he wrote:

Yet, the November rite of Remembrance, instituted to appease survivors and smooth official consciences, served its original purpose long ago. Why does it endure? Because there is nothing, nothing at all, that redeems the first world war in memory and turns it into happy lies. It is a scar, a void, a horror. In remembering it we are doing a duty to those who died with no glamour, no heroic myth, no purpose – like cattle.

The second world war killed more people but it generated myths. The first world war left no illusions standing. No myth-maker has ever been able to redeem it. In this war we therefore see the true face of all wars – the unmasked skull, rotting in a muddy trench. That’s why we should never forget it. That’s why we never can.

More than being moved, we should strive to keep the memory of the First World War alive and create something good out of it, don’t you think?