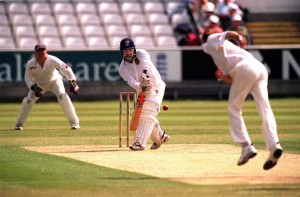 When people talk about British sports, the first thing that would probably come to mind would be football, or footsie as enthusiasts like to call it. However, there are other sports that originated in England and one of them is cricket. This sport has been around for centuries and can actually be traced back to the Tudor times in the 16th century.

Who played the first game of cricket? It really is not clear but some historians think that the game of cricket was invented by the children of workers in the farming and metalworking industries. Another theory is that cricket could have been played by Prince Edward in the 1300s. The former is actually the more accepted explanation.

Today, cricket is played by countless people in various countries. It has gone a long way from its humble origins centuries ago. Although cricket may not have reached the heights that football is currently enjoying, it really does have its own huge following.

How do you play cricket? It is played on a green field – much like many other sports. In the middle of the field, there is a flat strip of bare ground 20 meters long. It is called the cricket pitch. At each end of the cricket pitch, a wooden device is placed. This is called the wicket and it is used as the target. The cricket ball, weighing in at 160 grams and made of hard leather, is bowled by a player towards a wicket. The opposing team has a batsman who guards the wicket to avoid the ball hitting the target.

These are the basics of the game which has captured the hearts of many people around the world. You should try watching a game just to see what it’s like.