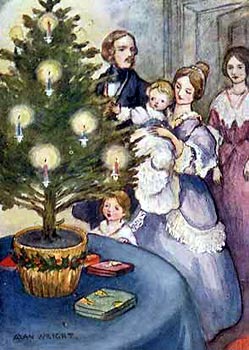 It was also during this time that the Twelfth Night became firmly embedded in the English Christmas Tradition. The Twelfth Night is actually the 5th of January and is celebrated as the end of the Christmas season. This tradition can be traced way back to the Middle Ages but the festivities surrounding this date can be attributed to the parties that the monarchs and other nobility held during this day.

‘If there is one thing inseparable from Christmas in general and the little ones’ seasonable gatherings in particular, it is – a cracker. With what a delightful look of expectation they have waited for it to go “bang”, and how they have screamed as they scrambled after the surprise which came in response to the explosion …’.