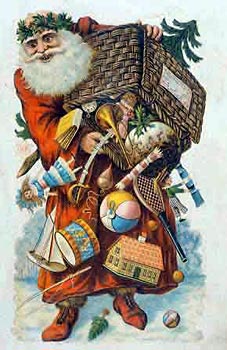 In medieval England and for centuries afterwards, the figure of Father Christmas represented the spirit of benevolence and good cheer. In the 19th century, his role changed to something more like that of the European Saint Nicholas. At about the same time, Dutch emigrants took the story of a legendary gift-bringer called ‘Sinterklaas’ to America, where he eventually became known as Santa Claus.

The names may be different, but there were enough similarities between all these symbolic personages to allow, by the early 20th century, Father Christmas, Santa, St Nick and others to merge. And the resulting ‘right jolly old elf’ is now the universally recognised symbol of Christmas.

It was also during this time that stockings became a staple of Christmas celebrations. In fact, the stockings were adopted from a Dutch tradition wherein the children stuffed their stockings with straw, which was supposed to be a gift for Father Christmas’s horse. In return, they hoped to be given some sweets.