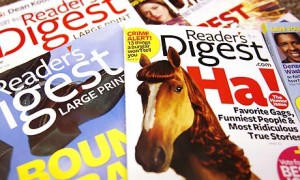 Serials have a way of coming and going with the changing of the times, yet there are certain publications that seem to have a lasting value; proven and tested over time. One of these is definitely Reader’s Digest. For many generations, this publication has been a staple. From doctors’ offices to family coffee tables to libraries – copies of Reader’s Digest can be had for reading pleasure. All over the world, Reader’s Digest has become known as a reliable source of information. The United Kingdom is no exception.

Recently, however, the British arm of Reader’s Digest experienced serious problems. On the 17th of February, the business went under. This was a mere half a year after the United States arm filed for bankruptcy. As can be expected, a considerable number of buyers expressed their interest in buying the company.

More than keeping its 500,000 subscribers happy about continuing to receive editions on a regular basis, the move by Moulton has other implications. Reader’s Digest in Britain employs a little over a hundred employees. While the number may not be that huge as compared to other companies, these people’s lives are greatly impacted by the saving of the company. With the £13 million that Moulton’s company is investing in Reader’s Digest, their lives just might be changed for the better despite the bleak economic times.