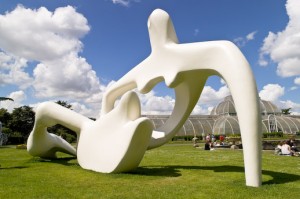 Don’t be embarrassed if you do not know the answer. Reading that question, you probably heard some bells ringing in the background. That is but understandable as Henry Moore is arguably the most celebrated sculptor in the United Kingdom.

Born in 30 July 1898 in Castleford, Yorkshire, Henry Moore is perhaps best known all over the world for his sculptures which were larger than life. Many of these monumental sculptures have been purchased – and subsequently displayed – by private institutions.

The reclining form is considered to be Henry Moore’s signature form. Wikipedia elaborates:

Moore’s exploration of this form, under the influence of the Toltec-Mayan figure he had seen at the Louvre, was to lead him to increasing abstraction as he turned his thoughts towards experimentation with the elements of design. Moore’s earlier reclining figures deal principally with mass, while his later ones contrast the solid elements of the sculpture with the space, not only round them but generally through them as he pierced the forms with openings.

Though Moore died in 1986, his legacy continues with the Henry Moore Foundation, of which his daughter Mary Moore remains a part. In fact, The Guardian recently published an interview with her – a very rare occurrence.

Those who are interested in the work of Henry Moore will soon be treated to an exhibition at the Hauser & Wirth gallery in Central London. The Guardian narrates:

The show will span six decades and incorporate 70 works from the private family collection that have never before been shown publicly. Several items – such as the concrete bird table he made in 1942 that was used by the family for several years – carry a deep personal resonance.

There is a hope that the exhibition will lead to a reassessment of Moore’s work because, as Mary puts it, the ‘acclaim and affection’ in which he is held often obscures the ‘radical’ nature of his art.