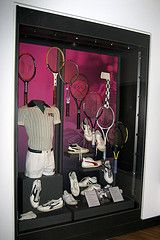 Tennis is one of the major sports in England and has long since been quite as popular in other parts of the world. This year, the biggest event in the world of tennis is about to be witnessed – the 2008 Wimbledon Championships. This tennis tournament has a long and renowned history. In fact, this year’s tournament is already the 132nd edition of the Wimbledon Championships! Running from the 23rd of June to the 6th of July this year, the 2008 Championships will take place at the All England Lawn Tennis and Croquet Club in Wimbledon, London.

What’s up for this year’s tournament? There are varying events, which include:

What’s special about Wimbledon? It’s just that Wimbledon is the end all be all of tennis. It is the premier tournament – if you make it to Wimbledon, then you have made it in tennis. This year, some of the notable names that we will be seeing at the tournament include, Federer and Nadal – two of the most known names in tennis today.